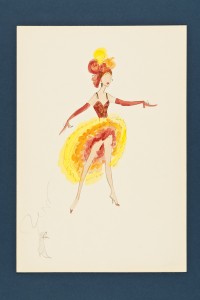 On a cold but sunny Sunday afternoon, the 27th of January, I grabbed the chance to attend a guided tour of the Theatre Museum Carlo Schmidl marking the anniversary of Giuseppe Verdi’s death, and I discovered a real gem.

Luckily, I managed to get there on time. Some people were already waiting; some joined later on. We were only a small group, unfortunately, but everybody was very interested and some of us with a passion for music. We walked up to the first floor of the magnificently restored Palazzo Gopcevich. Our guide, who is well-trained and very kind, introduced us to the world of lyrics, after a short excursus on the history of the museum. Founded in 1924 by Carlo Schmidl, a collector, musical editor and merchant, the collection was initially located inside the Verdi Theatre. In 2006 it was moved to its final destination in the prestigious Palazzo of via Rossini.
The first stops of the tour are the saletta and the corridor on the first floor displaying playbills, among which two presenting operas written by Verdi expressly for Trieste: “Il Corsaro” and “Stiffelio”; prints and

newspaper clippings witnessing the important past not only of the Verdi Theatre (formerly Teatro Grande and Teatro Comunale), but also of all the other theatres in the city, some of which have been torn down or transformed into movie theatres.
The Mauroner Theatre, for example, was destroyed in a fire in 1876 just before the performance of Lucia of Lammermoor, rebuilt as Anfiteatro Fenice and then transformed into the cinema Fenice, which again was destroyed by fire (sigh!).
The tour feels like a plunge into a glorious and culturally lively past!
There is a collection of musical instruments from Europe and overseas, a magnificent medal collection, a temporary exhibition about the baritone Giuseppe Kaschmann from the island of Lussino, and a wide range of theatre costumes…
What an abundance I would have never imagined!
In the central room, dedicated to important composers, there is even a manuscript by Verdi, a lullaby written for the newborn son of Giovanni Severi, a fairly good baritone who hosted the Maestro for a few weeks during the staging of the Stiffelio.
One floor up, to our surprise there is a collection of mechanical instruments, among which two piano players used to study the conservation of sound. But the pearl in the crown is the room dedicated to Giorgio Strehler: here you may find everything personal, gathered thanks to the generosity of his women.
Time was running fast and I realized I’d seen only part of this wonderful museum, which, further to the material displayed, holds a lot more: a huge library, specialized in music and theatre performances with an extraordinary section dedicated to opera librettos; an archive, which is famous worldwide, documenting the life and work of theatres and artists through a collection of posters, programmes, sketches of all kinds; the media library, the photo library…..
Even if you are not too fond of music, the palazzo itself is worth a visit. Its restoration is wonderful and the flooring, wood inlaid with mother-of-pearl, simply unique.

The Civico Museo Teatrale Carlo Schmidl, via Rossini, 4 is open every day – except Monday – from 9 am to 7 pm